home work, an interview with c.clarino

How does the narrative relate to the musical aspects of the work?


Firstly, when i composed this work, all aspects of this work had to be as closely related to each other as possible. The different components (gestures, sound, text, length) must be connected.
At least, that was my goal.
The main point of Homework II: In The Garage is to show someone reading a generic instruction manual. This action is superimposed with a ritualistic attitude which transforms the reading and action of assembling the device into a trance.
The text alternates between the introspection of the performer and the text of the instruction manual. As the piece progresses, these two concepts merge.
The music does allude to the ritualist aspects and gives all the dramatical direction.  It also shows the destruction of the individual via the paroxysm of physical activity.
I must say, however, that the narrative is quite allusive and doesn't establish a clear plot. My difficult task was to be both precise and allusive…
The idea of body percussion and its short, percussive sounds is linked to the idea of building a mechanical / electronic device, both through the type of sounds and the "DIY" concept (the person in his garage building something produces all the sounds himself). This opposition between the mechanics and the absence of instrument (not so frequent into contemporary music) is the central point of the piece, because it questions the existence and the nature of the thing, of the tool, the object.


What got you interested in incorporating physical gestures into musical works?


That is a complex question. I believe that music must escape any convention, whether they come from the contemporary music world or any other.  It may be a personal convention… In my case (I have a classical music background - I was a cellist and musicologist as well), my goal is to bring music outside the concert hall and outside of the traditional perception of "concert music."  I'm not giving up on music, but I try to push it against its external boundaries.
In that regard, I integrate various extra-musical elements: texts, gestures, images and found objects.  I feel that contemporary music is suffocating from being too much of "art for art's sake", or as Reinhardt puts it "art as art".  And to make sense of music activity, the use of non-musical materials is critical.
In the case of Home Work II: In The Garage, the gestures are connected to the idea of building an object.  But gesture is also something taken from daily life, which entices the viewer.
Gestures are strictly controlled in the training of the musician. The more virtuous a performer is, the more controlled his or her gestures are.  A lot of these gestures are parasites, and those are the ones I'm interested in, because they are not noble (it's very important to work with the "leftovers" of art). I'm not interested in gestures in general, I'm interested in non-musical gestures, in order to make them part of the work by their proximity with musical gestures.  The gestural material enhances the musical effect, and that's a very complex subject. It's possibly my most important question (of which I'm a beginner), as important as how text or language merges with music, or how music merges with visuals, because it carries more weight than simply a sonic experience, visual experience, understanding, and so forth. The potential is enormous.
Besides the fascist attitude of the entertainment industry, which convinces its audience of only ONE possible sound for ONE image, ONE possible music for ONE emotion, this domain of synesthesia is still open to experiments, especially in the field of smell and touch.


What role does (or can) the theatrical component of your works have on the aural outcome of your music?


I think I've partially answered this in the previous question. The visual aspect of the piece is critical to such an extent that the sonic elements of the piece alone are not relevant.

Any other background info on In The Garage?
I would just mention that this work is part of a longer cycle which explores manic gestures in daily life, called Home Work, with three characters (the garage one is among them). 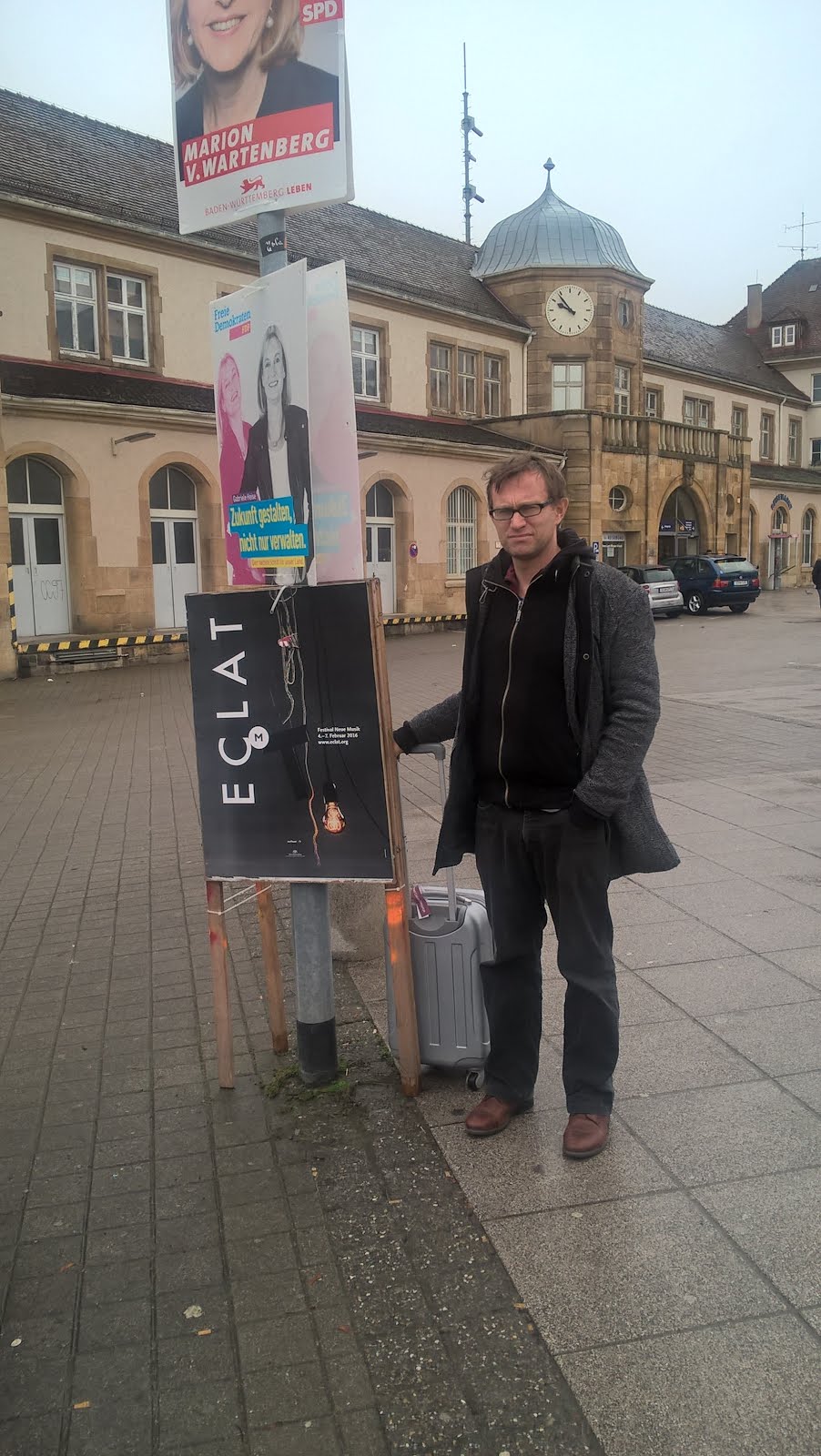